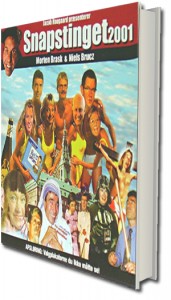 It is both witty, right to the point and at times boundless, which here refers to both Boundless Denmark and to the boundlessly funny comments.