Former Minister of Economic Affairs Marianne Jelved reviewed Schnaps Parliament with the following words:
Satirist Morten Brask has followed us politicians closely in our daily lives at Christiansborg. It is both witty, right to the point and at times boundless, which here refers to both Boundless Denmark and to the boundlessly funny comments.

“Imagine a world without the Danish peoples Party” 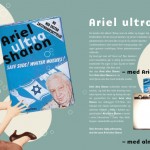